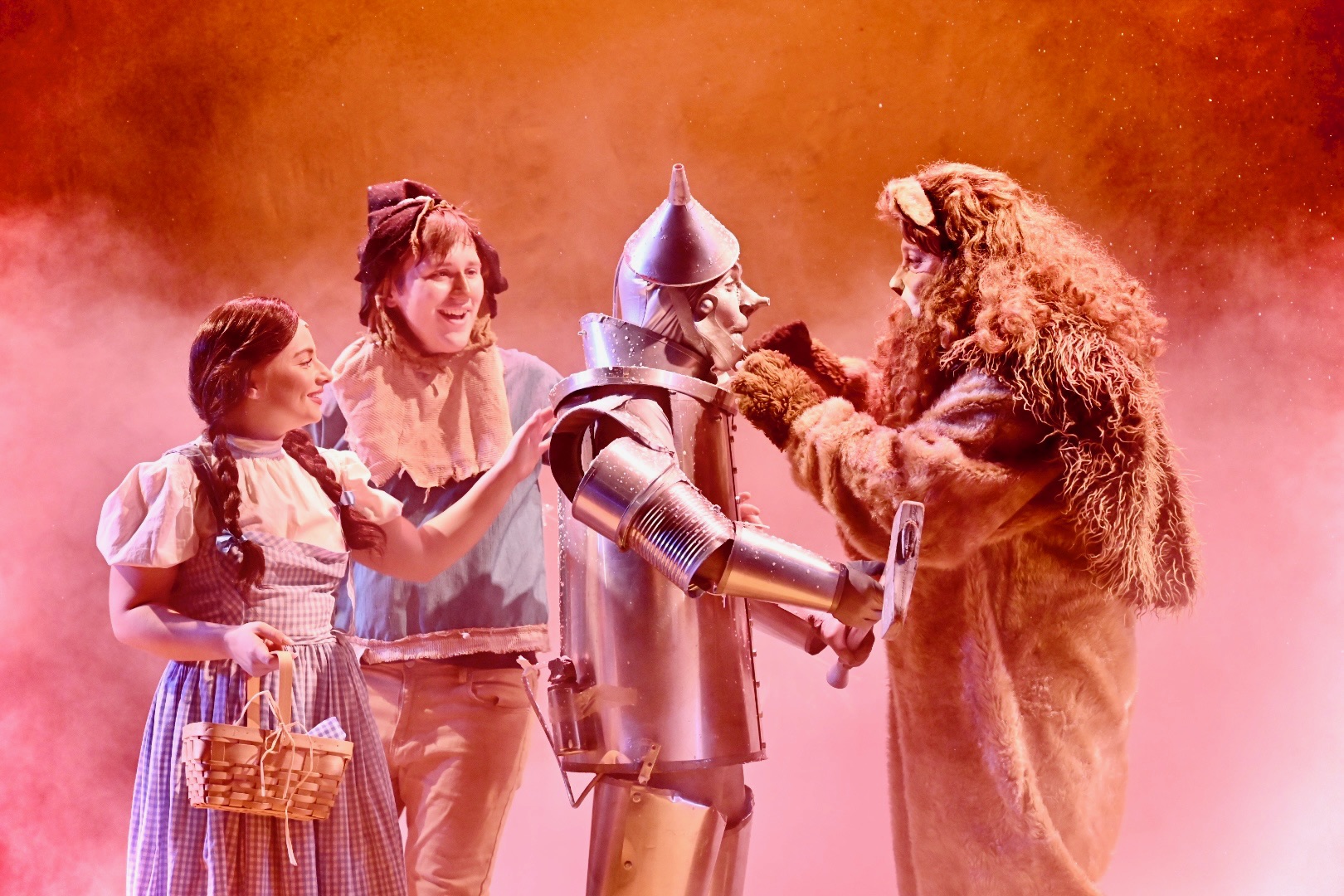 As soon as CM Performing Arts Center’s live orchestra struck up the first few chords of “The Wizard of Oz’s” iconic overture, a wave of nostalgia hummed throughout the Noel S Ruiz Theatre. Multiple generations filled the house at the opening weekend matinee. Children, parents, grandparents, and children at heart visibly delighted in the stellar stagecraft, vibrant costumery, and charming performances featured in CM’s Season 35 finale.

John Mazzerella – CM’s resident scenic designer – steps into the role of director for this production. His aptitude for appealing aesthetics contributes to the overall visual beauty of this production of “The Wizard of Oz.” Since I was a young girl I’ve seen countless iterations of the musical – from the 1939 film to The Madison Square Garden production featuring Mickey Rooney and Eartha Kitt and even The Wizard of Oz: On Ice! As a self-proclaimed Oz connoisseur, I can assure audiences that CM’s production does not disappoint.

The heart of the musical, of course, is the iconic heroine in her signature blue gingham dress and braided pigtails – Dorothy Gale. Livi Rose is delightful as Dorothy, and it is evident she took great care in portraying the character. She noticeably speaks throughout with a classic Mid-Atlantic accent, which was popular in the entertainment industry at the time of the original film’s release. She also blends in Dorothy’s roots as a Kansas farm girl with a slight twang, which contributes to her success in making the role made famous by Judy Garland her own. She also impresses with gorgeous vocals – again, making the character her own with a pleasantly folk-like tone and an impressive belt and vibrato. I must also commend her for her careful handling of a real terrier dog portraying her companion Toto. It should be noted that Ms. Rose shares the role of Dorothy with Sarah Minto, a CM mainstay who I can imagine is also wonderful in the role after having starred in a past children’s theater production of Oz. No matter which Dorothy you see, you’re certainly in capable hands.

The role of Elmira Gulch and The Wicked Witch of the West is also doubled in this production. I had the pleasure of seeing Elizabeth DeGennaro take on the equally iconic role. Her comedic timing is a perfect fit for the more comical witch in this version of the musical, which may offer parents a bit of relief in terms of the scares being toned down for young audiences. However, she still maintains an intimidating presence in her pursuit of her recently deceased sister’s Ruby Slippers. And with a perfectly villainous lair built by Mr. Mazzerella, she chews the scenery and delivers a memorable performance. Jenn Demopoulos portrays the doubled role in alternate performances. With an impressive resume of portraying a variety of menacing characters like The Stepmother in “Cinderella” and Mayor Matilda Hyde in “All Shook Up,” she is very much primed to bring the green villainess to life with fervor.

The entire ensemble of this production is a grand display of familiar faces at CM. It was a treat to see Gabrielle Farah back on-stage portraying Glinda the Good Witch – overseeing the talented youths joining her as “The Munchkins.” She also doubles as Aunt Em and succeeds in distinguishing between the two characters. Her beautiful pink gown and her blonde curls struck me as a wonderful aesthetic combination of Billie Burke‘s iconic costuming with a touch of her modern counterpart – Glinda (or Galinda) from “Wicked.” Chakira-Iliaa Doherty’s costumes throughout provide a visual feast for the eyes from the apple-throwing trees evoking the image of Greek goddesses to the flapper inspired attire worn by the buzzing critters in “The Jitterbug.”

As the story goes, Dorothy meets her three companions one by one along the Yellow Brick Road. Will Brennan understudied the role of the aloof Scarecrow while also portraying farmhand Hunk in the opening scenes in Kansas. His agility as a dancer and pleasant vocals come together as a great portrayal of Dorothy’s first friend in Oz. Meanwhile, Patrick Campbell truly tips his hat to Jack Haley with his sentimental portrayal of the Tin Man. “If I Only Had a Heart” was a standout in this segment of the show with the inclusion of tap choreography by Kevin Burns. The trio – and eventual quartet – all prove to be triple threats and take on each dance number with gusto.

When it comes to bringing the Cowardly Lion to life on stage, an actor faces the challenge of measuring up to the beloved Bert Lahr. However, Kevin Callaghan takes on this challenge head on and is fantastic in the role. While he does pay some homage to Lahr’s dialect, he establishes his own turn as the Lion with fresh comedic choices and physical comedy. Fortunately, this version of the stage musical offers him many opportunities to sink his teeth into the role with the expanded version of “If I Only Had the Nerve” – which was reduced for brevity in the film – and the amusing “If I Were King of the Forest.” The latter is typically hit or miss, in my experience, but Callaghan’s rendition thoroughly entertains with numerous impressions including – a personal favorite – Marlon Brando in The Godfather.

As always, CM has assembled a strong ensemble of performers, which elevates the production to a professional caliber. Each performer is visibly having a blast and it becomes contagious as they bring the glitz of Emerald City and the spook-filled Haunted Forest to life in energetic production numbers. Marc Strauss, last seen as Harry MacAfee in “Bye Bye Birdie,” makes for a wonderful guide with a twinkle in his eye as the Emerald City Mayor leading “The Merry Old Land of Oz.” Like the trio’s songs, the number includes the intro originally written for the film by Harold Arlen and E.Y Yarburg that was later cut – providing enjoyable supplementary exposition for the city “where it’s never too hot and it’s never too cold,” “where you’re never too young and you’re never too old.” His memorable performance epitomizes the fact that there are no small parts, only Munchkin-sized actors. He also doubles as Dorothy’s exasperated Uncle Henry at the top of the show.

Finally, Robert D. DePersio Jr. plays the titular “man behind the curtain” – The Wizard of Oz, himself – as well as Professor Marvel. Mr. DePersio has a history of making magic behind the scenes as the Artistic Director/Founder of Productions Over the Rainbow, Inc. Theatre Company and a chorus teacher at Gelinas Junior High School. With this in mind, it’s no surprise that his performance has a paternal touch. Despite admittedly being a “humbug,” it’s easy to forgive the faux-Wizard for his faults due to Mr. DePersio’s charisma and humor.

While the performances and set pieces alone would dazzle, this production soars to new heights with remarkable stagecraft on display. The tornado scene is an impressive technical feat, simulating a disorienting ride through the skies. Instead of a flying rig, which was used in CM’s last mainstage production of Oz, Mr. Mazzerella opts for a simpler approach that I would argue is more impactful and, to be honest, less silly. Dorothy’s front porch shakes and quakes at center while a piece of dark fabric runs across the stage, establishing the lining of the cyclone. Meanwhile, projections zoom past – cows, trees, and, of course, Miss Gulch on a bicycle! Seemingly by magic, the canine-hating villain rides past Dorothy and somehow reenters – now transformed into the Wicked Witch of the West riding a broomstick. The scene comes together magnificently with the combination of Mr. Mazzerella’s scenic design, Christopher Creevy’s lighting design, and Brianne Boyd‘s sound design. The production quality continues to impress throughout with the poppies scene concluding with real snowfall and additional effects.

It’s true that there’s no place like home, but there is also no place like the theater to spend a night or afternoon with the people you love. With three weeks of performances remaining, there is no better time to get your tickets and stroll down the yellow brick road with Dorothy and all her friends at CM Performing Arts Center. 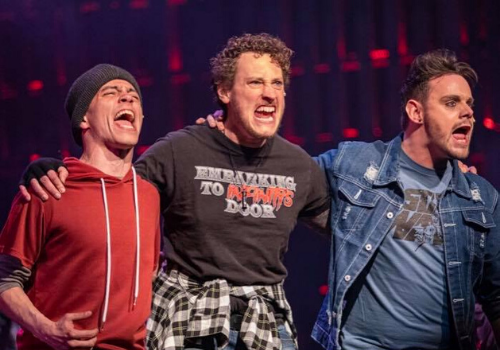 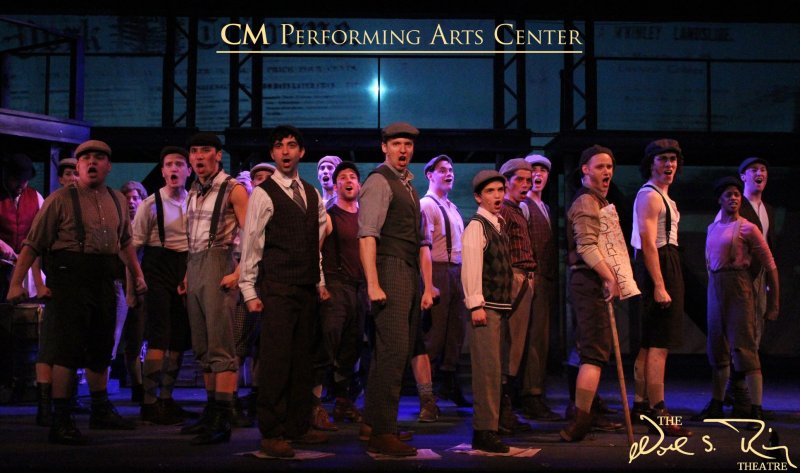